skip to main | skip to sidebar

I used Inspired blueprints sketch # 46 to create this LO. 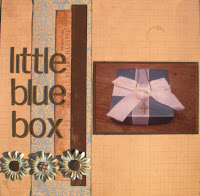 Hidden jouranling:
A few summers ago while visiting my parents, I told my mom tht I wanted a cross necklace from dad. We went home for Christmas, like we do every year. While saying good night to my mom, my dad handed me a little blue box. With mom and I already crying, I opened the box and there sitting in a little bag, was a cross necklace with a note telling me that the cross belonged to my Great grandmother and when he joined the Army, my grandmother gave it to him. My dad told me he used to wear the cross on his dog tags for the longest time. He was afraid that he was going to lose the cross, so he taped it to the inside of his jewelry box.
A couple of weeks after my dad gave me the necklace, he became sick and things just started going wrong. I told him that it was because I had the necklace. That great grandma wasn't done "protecting" him. The following Christmas again we went home and that night as we were saying good night, I handed my dad the little blue box. I enclosed a note with the cross telling him taht this cross protected him through his life adventures and wasn't done protecting him. I told him that I wanted him to keep the cross until he had gotten a clean bill of health from his doctor. After giving it back, my dads health improved. Chris had to go to a school down at Fort Bragg and stayed with my parents for that week. When Chris came hime, he handed me the little blue box. For a whole week, I called my dad every night making sure he was well. This cross means the world to me and I will always cherish it forever.
Thanks for looking. =)
Posted by Christa at 8:42 AM

Oh this is such a great project! If you haven't heard about Papercraft Star yet, we'd love for you to enter some of your great projects there, we have a DT call coming up soon AND a gift certificate give-away going on right now! http://papercraftstar.blogspot.com/2010/09/another-gift-certificate-give-away-at.html

Thanks for stopping by

Christa
Hi and thanks for stopping by. My name is Christa, wife to Chris and mom to Jenn (19) and 3 busy sport playing boys. Garrett (17) Jacob (14) Michael (12) I'm married 21 years to an Army man, was raised an Army brat. Traveled the world growing up and now with Chris and the kids. So now you can see that there is never a dull moment in our house. Right now Good Ole Uncle Sam has us living in WV. I love it here, love the 4 seasons (well could live without all the rain) but my favorite season here in WV is Fall. With all the moutnains and trees, BEAUTIFUL!! Again thanks for stopping by, make sure you say hi before leaving.